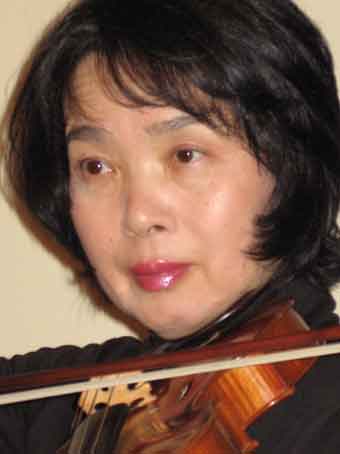 "... she launched into Bach's Chaconne with great assurance. Her impressive basic pulse never excluded individual felicities in matters of phrasing and nuance, her full, rich and throaty tone sounded entirely apt, and her capacity to think in large beautifully related paragraphs rather than small sentences meant that she was more than equal to Bach's noble and massive structure. She was also finely energetic in Prokofiev's D major Sonata, relishing its abruptly contracted whimsicalities to the full." (The Times about the Wigmore Hall Concert)

"... sensible, boasting of talent and musicality ... the japanese Miyoko Sato lighted a fire to draw audacious as well as most subtle sounds from her violin." (Paris-Normandie)

"What a great concert, and which brillant musician! She masters an exquisit sound with an unconstrained bow. I enormously appreciated her concert!" (Normann C. CARREL, BBC program director)

"... waiting for the major event, SCHÖNBERG's concert for violin op. 36, composed 1934/36 and rarely played in France. The composer commented on it: 'With delight I add to the repertoire a piece unplayable. I attach great importance to its difficulty.' To justify this painstaking œuvre, the japanese violinist staged her prodigious talent, working her magic on the vertiginous difficulties, demonstrating her art tantamount to the measure of this composition." (De la musique)

"One of the main attractions of the Mozart Orchestra concert in Blackfriars Hall, Norwich, on Saturday, was the fine playing of the young Japanese violinist, Miyoko Sato." (Eastern Daily Press)

"Miyoko Sato has a fantastic power in attacking the PROKOFIEV sonata, demonstrating a strong sound in all shades." (The Daily Telegraph)